The Pope is Dope: “Religion is the opiate of the masses.” 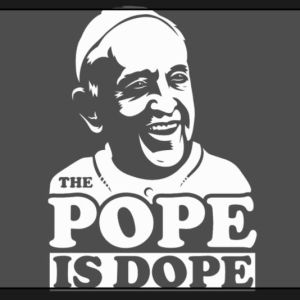 “The light of love is born when together with hearing and seeing, disciples take the Body and Blood of Christ.”

When the World Meeting of Friends announced that Pope Francis would be visiting the US, a shimmer of excitement was shaken off the shroud of the Catholic Church’s shameful reputation and their decrepit churchgoers.

When the AP announced that that Philadelphia had been chosen to host the visit, a glamour of revival riled the region’s pilgrims.

When Pope Francis announced that he would, in the name of God, absolve abortion, he consecrated a peaceful mind to a generation who have always prayed for forgiveness.

I stepped out of the bistro’s kitchen door and the alleyway, which normally was for crippled pigeons, smelly puddles and pill poppers, was crowded with pleasantries and crush of crisp white cotton TShirts with icon images.

An old lady with a pretty smile approached me, “Excuse me, do you know where I can find Pope Francis?”

“Yes. He will be attending the Festival of the Families event on Saturday & will be giving mass of Sunday, both on The Parkway. And the whole thing will be live streamed worldwide and throughout the city.” I responded.

“No dear. He’s in my heart and soon he will be in yours too,” she said sweetly, her chalky old hand squeezed my warm arm, and before I could pull away, she allowed herself to be swallowed, smiling, into the ebb of the crowd.

I swung open the kitchen door and ended my short break with a heavy sigh.

“I’m wishing like hell I didn’t have to be at the restaurant this weekend,” I said to my work friend Susan.

“I heard people are waiting 3 hours to walk over the bridge for Sunday’s mass,” said Susan, sipping an espresso martini from a coffee mug.

“Where do they think they’re going to go when they get here; just all crowd around huge TV’s? To see ‘the people’s Pope’? So weird. The gross alley is even crowded!”

“OK lineup!” said Chef, who was used to stewing in his own overheated career.

“We will be featuring an abbreviated menu. There are no exceptions. If guests want to use the rest room, they must get a ticket from you, no exceptions. Let’s get this over with!”

Our list of concerns grew alongside our black AMEX card and white powder, high power-clientele. The lights grew dimmer and the party thicker with international guests and American couples in cotton; the city was full with good faith and buzzy hope.

I slept that night with a dark deepness of peaceful dreams and cuddly ease.

A sharp knock on the door jolted me from my dreamland and I slid onto the tile floor with a clumsy quickness.

“Good morning! Have you made your peace with God?” said the handsome man, bright eyes and tie coordinated.

“I’m not interested,” I said, closing the door and got ready to go work brunch.

My walk north up 18th Street toward the restaurant was as populated and jubilant as New Years Day, just more hushed in tempo and tone.

“Lineup!” Chef called & we gathered around the bar, Susan hunkering into a cauldron of cappuccino and greasy bagel sandwich with sriracha.

“So there is a parade through the city,” started Chef, “and there are Jumbotrons all around here; The Festival of Families is being held on The Parkway: I think we will see lots of action all up and down the streets. Most of you were here yesterday so you know the deal. I don’t want any mistakes. ”

The sidewalk surrounding my bistro tables was trafficked with strollers, older men in their Sunday best and ladies with sing song voices, all wearing the mandatory clear plastic backpacks. Everyone tried to move closer, get somewhere near the Pope or a TV with him on it; the jammed sidewalks spewed into 18th street. Every swing out of the restaurant was a tray full of polite requests and every swing back in was full tray of empties.

“It’s weird,” I said to Susan, fixing a tray of coffee, “people on the sidewalk are paying attention, giving me the right of way – and it’s mega packed! It’s so polite.”

I swung outside with my coffees and weaved my way to the table, “This is the decaf,” I said, pouring the French Press for a lady who wore a “Pope Francis Pray For Us” pin. “For dessert…”

“One moment, dear,” said the ‘Pray For Us’ lady, “Pope Francis is speaking.”
Their eyes were trained on their phones, watching the live broadcast happening a few blocks away. There was a surge to get to the nearest television and, when there was nowhere left to move, foot traffic slowed and stopped and everyone huddled around the glow and sound of their phones.

I stood on the front step of the restaurant and watched the door while all my coworkers started raptly at their phones. The constant busyness, which had been escalating, halted and the volumes of the combined phones made the volume of Pope Francis’ voice and its message* audible:

Saint Paul would use a formula which became classic: fides ex auditu, ‘faith comes from hearing’ and the ‘obedience of faith’ which are assimilated along a journey of discipleship, as is in the case of the Fourth Gospel, ‘Hearing him say these things, they followed Jesus’.

But faith is also tied to sight, for example the beliefs raised following the raising of Lazarus, ‘having seen what he did, believed in him’ At other times, faith itself leads to deeper vision: ‘If you believe, you will see the glory of God.’

The light of love is born when together, with hearing and seeing, disciples take the Body and Blood of Christ. Saint John believed that by taking this flesh and blood, and coming among us, as I am to you, Jesus touched us and transformed our hearts.

At mass tomorrow, my lambs, I ask that you watch and listen as I deliver the word of The Lord, and pray to God this evening for forgiveness to prepare yourself to receive the Body and Blood of Jesus Christ.

As the broadcast faded and phones were put away, the movement of the city resumed, though the tempo became easy going and countenances ethereal.

“I can’t believe you didn’t watch the broadcast,” said Chef.

“His message was just so hopeful. I guess because you didn’t watch it…”

“Yeah, but I heard it; there wasn’t much about ‘Love is our Mission’ or whatever.”

“I can’t wait to hear what he has to say for mass,” Chef replied.

During my dreams that night, I saw a pool of blood, wind making waves, waves rolling like thunder, crashing blood crushing bones and melting minds, all with a glimmer forsaking the darkness, making the thick blood shine like a full moon.

“Why are you late?” Chef asked patiently when I interrupted lineup.

“I could barely get up the street. Some guy literally elbowed me out of the way when I tried to get past him.”

“Well that wasn’t very kind of him, and not at all what this celebration is invoking. I hope you are OK.”

“Thanks,” I said, searching for his sarcasm and finding none.

“So the Pope is giving mass today at 4:00. We will all pause to hear the Lord’s words & watch the mass. We have brought in the TV’s we use for baseball games.”

“What? What about our tables?”

“They’ll be watching too. We will all be watching. And priests will be coming to the restaurant to deliver communion, which is an amazing blessing for us all.”

“What? How is that? I don’t want communion.”

“That attitude is not at all what this celebration is invoking. I hope you will change your mind after mass.”

“That was super weird,” Susan said and I agreed.

The well-mannered guests waited patiently for their refills and set a lovely atmosphere, the French window wide open, sunshine spilling in.

“It’s 3:55, I’m going to sneak out for a cigarette during video time. Watch my section?” Susan said.

The TV was queued up and the music was extraordinally exquisite. My mind got wrapped in the twinkling brass and silvery tone of the boys choir, the music wrapping my thoughts and taking them somewhere heavenly and serene.   I lost time and commitment, situation and circumstance and didn’t realize the mass had begun until Pope Francis’ voice fractured through the masterful music.

O Lord, we humbly implore you: make holy these gifts we have brought to you for consecration, that they may become the Body and Blood of Jesus.

I watched and listened and my heart was filled with the good words, my mind raptured. A golden glow surrounded every living thing with a radiating halo of beauty. My feet felt lighter, as if they could let out a sigh of relief to drudgery. My heart burst forward, toward the light, pure and unburdened of mortal or venal sin, in good conscience and emanating golden.

When the priest entered the restaurant, we patiently formed a line.

“Body and Blood of Christ,” the priest said to me, our eye contact pearly gates of belief.

“Amen,” I said, accepting. The Eucharist tasted like minerals, iron, battery ends. It tasted alive and vibrating with a lust for light and life. It tasted of the kingdom and glory of heaven.

Pope Francis continued from above:

We pray to recognize the sacraficial Victim               by whose death you willed to reconcile us to yourself, grant that we, who are nourished by the Body and Blood of your son, may be one body, one spirit in Christ. May he make us an eternal offering as a sacraficial Victim, so we may obtain an inheritance; we, who understand and do not question your will: your elect, your disciples, your devout pilgrims and stolid inquisitors, forever and ever.

Susan came back into the restaurant and, with no Body or Blood to warm her, no halo to light her, she was full of smoke and poison. Susan was not one of the illumination.

Pope Francis’ voice continued through streaming media, “Any non believers are to be given to The Lord and he will care for them; he will teach them.

“Do you believe in the power and glory of The Lord?” I asked Susan.

The Pope bellowed, “God has redeemed all of us with the Blood of Christ! Body & Blood compels you!”

I bit Susan’s wrist, her blood tasted minerals, iron, battery ends. I chewed the flesh off the bone and as her body died, I knew Susan was in heaven and that was good. I looked around for more nonbelievers to help, save.

The voice from above continued:

Let us give thanks that the Holy Spirit has visited you, as you are all my disciples.

That we may share in the glory of the suffering of Christ, which unites us.

Go with the Lord, my Children, my inquisitors, my believers, and spread his good word.

Our resounding “Amen” reached around the world; its’ message of hope joined us with one mission: to spread the word of the goodness of the Body and Blood