The Legend of Crazy Cat 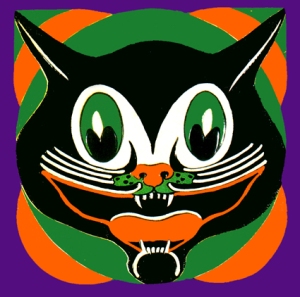 “Crazy Cat turned to the people in the pub, his signature smile wiped all over his fuzzy face, fangs shining, and began, ‘Have ya’all ever heard The Legend of Crazy Cat?’ “

For as long as he could remember, & he’s been alive a long time now, people have been calling him Crazy Cat.  His old mom & daddy started calling him Crazy Cat the first time he smiled.  All babies smile, everyone knows that, but the way his mom & daddy tell it, his smile wasn’t wasn’t given out at random.  He would turn it on for candies in an old woman’s pocketbook or a hug from a bouncing-tittied babysitter.

“My baby boy is one crazy cat!” his mom would laugh & kiss his cheeks with her red lips. “He’s just a child & he could charm the shine off a pair of two tone shoes!”

His smile got him his nickname & anything else he wanted.  As soon as he could talk, Crazy Cat was spinning stories & weaving deals.

Every adult & kid in town knew to steer clear if they had a pocket full of cash or bag of candy.  You should’a seen ‘em cross the street when they say Crazy Cat sauntering by the storefronts.

Something on or about Crazy Cat was always glinting white sunlight.  Even on the darkest days, in the shadiest alleys, a silver toothpick danced across Crazy Cat’s smile or the nickel he’d be flipping would catch light & send it shining.

Because all the people in his town had Crazy Cat’s number, he had to go around to neighboring towns to squeeze a buck or a sweet kiss from a little lady. If he was lucky, & Crazy Cat usually was, he’d squeeze the buck & the kiss from the same unsuspecting gal.  Suffice to say, awaiting Crazy Cat at all the nearby provinces was both a warm bed & a steely knife.

Walking the distance from town to town, when he was alone and between places, Crazy Cat would make up stories to pass the time more pleasurably.  Most times, the stories would be about bedding down the beautiful gal in the town slowly disappearing behind.  Other times the stories would be ideas for swindles to use in the next town. Or Crazy Cat’d aggrandize about himself & his own fantastic deeds.  More important than any arranged swindle, these aggrandized stories won him trust.  The one about taking a bullet for a boy he trusted won him the devotion of the street kid, who then, in turn, warned Crazy Cat when the husband of the woman he was pleasuring was on his way home.  Crazy Cat always told about the time he tricked The Devil & that tale always scored him a round or two if he told it with enough dramatic pauses & cuss words.

The stories got to be so popular that when he sauntered into the pub in Provincetown & sat quietly sat picking his teeth with the end of one of his silver toothpicks, that by the time he introduced himself, most people had already figured out it was him.  This night, as he sat waiting for the right moment to begin weaving lies for a belly full of sauce, a fat-tittied woman sidled up beside him.  Crazy Cat loves fat-titties women so his eyes lit up like a China man’s explosives doused in ker-o-sene & his jaw loosened like the thighs of a sidling, fat-tittied woman.

“Well hello miss lady!  May I please have the pleasure of knowing your name?” Crazy Cat’s toothpick twinkled.

“HmHmHmmm,” Crazy Cat dragged his laugh, rasping, under his breath.

“Why you laughing at my name?” Miss Shallot asked, covering her bosom’s grill with a sausage hand.

“I ain’t laughing at your name.  Your name is dang near as beautiful as you.  I laughed because as soon as I saw you, my future flashed in front of my eyes & I laughed at a joke you told me when we’s little old people sipping sweet tea & watching the sunset.”

Daisy Rose Shallot was charmed from hairline to hammertoe, a fat bass wriggling at the end of a hook-line-&-sinker.

Well, Crazy Cat didn’t take especially any notice of the crowd around him as he told tales to Daisy Rose; crowds always form around Crazy Cat when he spoke.  He should’a been a bit more careful, ‘cause in the Provincetown pub was the husband of the woman, a man named Wilbur Whoburn, who missed catching his wife in bed with Crazy Cat with the moments bought from the impressed street kid’s tip.

Wilbur Whoburn didn’t know Crazy Cat to look at him, but he knew that damn devil story, had heard about it for months after Crazy Cat skipped town with his pride.

They beat him upside down the slung him over the back of an ill-tempered donkey.  Crazy Cat gurgled blood from his gut.

The rabble- turned – lunch mob rode on whiskey & adrenaline & made it to the crossroads, a place of neither here nor there, as dawn began to stir.

They strung Crazy Cat up like a piñata, that damn ass bucking under his feet.

“STOP!”  Daisy Rose gurgled & burbled on foot all these miles to try & save the illusions Crazy Cat had told her about a bright future.

“Don’t you dare harm him!” Tears mixed into the dust on Daisy Rose’s face making a mud mask.  “He knows The Devil.  The Devil owes him favors.  If you harm him, my Crazy Cat’ll get the devil on you.”

“She’s right, my lady is.  As I live & breathe, I can’t call in my debts to the devil, but the minute my heart stops, I can make The Devil do as I say.  He owes me!  First thing I’m gonna make that red son of a bitch do is fuck your eye holes with his big, red, pitchfork dick!”  Crazy Cat said with a crazy laugh, almost toppling off the defiant donkey.

At that, the ill-mannered donkey stopped bucking.  If there was wind or night sounds before, they certainly settled.

The donkey turned from brown to red, his hind legs cracking back into a standing position.  His ears flattened back & grew into long, hard horns, cloven feet dug deeper into the dirt as the motherfucker grew & grew

Suffice to say, there was nothing holding Crazy Cat up from choking anymore.  He was a worm wriggling in front of a killer shark.

Daisy Rose, re-imagining her future, hopped her big backside on Wilbur Whoburn’s horse & they hightailed it away from that place.

Smoke pooled around The Devil; it had to be The Devil, right?  I mean, how much more of an introduction does he need?

“Your stories reached my ears, you silly human, you “Crazy Cat”, said The Devil deeply.

“Well then that’s fantastic,” choked Crazy Cat, “So then you came to save me?”

“In a way,” replied The Devil with a careless flip of his finger.

Crazy Cat fell in the dust.  He slid down the knot like a necktie & removed the noose.  “Thanks my man!  If there’s ever anything I can do for you, just ask.”

“You will stop telling those ridiculous stories about me,” replied The Devil, sounding like a childish earthquake.

“Aaaaw, man, they just stories, a means to an end for me.”

“This is not a discussion.  The stories will stop.”

“All right, all right,” Crazy Cat agreed, concerned with saving his own skin.  “Can I tell people we’re friends & you saved me from a lynch mob?”

“NO.  The Devil is not benevolent & does not save those he should gladly reap.”

“Then why did you save me?” asked Crazy Cat.

“To teach you a lesson.  You bee bop around without a care, flaunting my name without reverence.  Crazy Cat you call yourself.  You don’t look like a cat to me, just a normal, tiny man,” dismissed The Devil.

“From now on your face reflects your true nature.  People will know and be forewarned that you do The Devil’s work without his permission,” growled The Devil.

Crazy Cat felt his furry, feline face with his still human hands.  “Well if it’s permission to do your work or whatever, I did not know.  Crazy Cat ain’t used to knowing the rules, let alone play by ‘em.  Tell me what to do boss man; I’m your guy.”

“That’s more like it,” said The Devil.  “Come over here & kiss my feet.”
Crazy Cat, nonchalant as ever, with his hands in his pockets, sauntered over to The Devil.  His green cat eyes heightened his vision in the still dark dawn.  Crazy Cat got down in front of The Devil, & instead of kissing anything, Crazy Cat stabbed The Devil & embedded him with one vertical & one horizontal silver toothpick, creating a cross.

“You son of a whore!” The Devil screamed as he was turned back into a donkey.
Crazy Cat knew he could never remove the silver cross embedded in The Devil’ Donkey’s leg or he’d have to deal with that shit again.  He also knew he couldn’t show his face until he figured out how to trick The Devil into returning his face to it’s previous dapper look.  But since The Devil Donkey was in his care, Crazy Cat knew in time he’d figure it out.

In the meantime, Crazy Cat was hungry & barely drunk so he hopped onto The Devil Donkey & rode to the next town.

Crazy Cat entered the pub.  When everyone gasped at his face, he smiled, jovial as ever & responded, “Don’t be scared!  It’s a tradition where I come from for one night every to wear a mask, make merry & honor the overworked Devil!”

The Christians raised their eyebrows.

“We all deserve an evening to be ourselves in masquerade!” Crazy Cat continued.

The Christians raised their glasses & The Devil Donkey seemed less angry at the tribute.

Crazy Cat turned to the people in the pub, his signature smile wiped all over his fuzzy face, fangs shining, and began, “Have ya’all ever heard The Legend of Crazy Cat?”